Last Friday my mother in law called me all excited about a radio program she was listening to. It was all about elves and hidden people in Iceland. It started off by saying if you want to do business in Iceland you better be nice to the elves.
The conversation had been sparked by a Vanity Fair article written by Michael Lewis about the economic meltdown in Iceland.
According to Lewis, when the American aluminum giant ALCOA decided that it wanted to build a smelter in Iceland, the company had to first verify that it wouldn't be trespassing on land occupied by "hidden people" or elves.Now, as far as we know, most ALCOA officials don't believe in elves. But ALCOA does acknowledge that it paid hard cash to make sure the future site of its smelter was elf-free.
The host then went on to interview Magnus Skarphedinsson, headmaster of the Icelandic Elf School. He said that ALCOA isn’t the only company to pay good money to go chasing mythical creatures. In fact 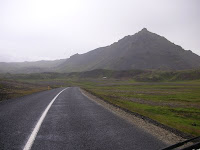 highway engineers built around a boulder when it was discovered that it was home to a group of hidden people. If they hadn’t done so then their project would have been subject to sabotage.
Big companies use a consultant to see if elves or hidden people are living on the spot where they want to build. That would be quite the profession.
Posted by Patti at 10:04 AM

That would be an interesting job, "elf-proofing" a particular piece of land.

I always wonder what sort of phenomenon or thing inspires such mythology. Most myths have a small fragment of truth in them. Generally it's natural phenomenon that people were unable to explain, but it would be interesting to see where the myths came from.

I've seen this before, and I would love to go to Iceland and check it out. I think it's awesome.

The query letter is almost there. Not sure when I'm going to submit as I'm trying to do a final (ha ha) edit on the book.

Ooh, increased awareness for the Hidden People can only be good for your book. Can't wait to read it.

Perfect timing! Maybe you should consider extracting a slam-dunk quote from this article to include in your query?

LOL * I'm sure you just groaned, right? However, this is great, having this kind of exposure to piggy-back against the premise of your novel.

Congratulations on being chosen one of the Top 10 Young Adult Fictional writers in Canada. Your prose is a godsend to all of us. Thousands of children are reading now thanks to your intricate plots, spellbinding themes of heroism and courage, and your ability to weave rich, believable stories out of your characters.

Look forward to reading your new work this year.

Bless you my fair child.