Maggie and the Seven Hippies… 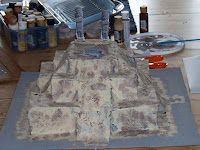 Yesterday was finally the last day of school. My kids brought home all of their binders, journals and portfolios. They dumped it all on the table and I had the dubious task of sorting through what was worth keeping and what could be tossed.

I have to say I chucked 90% of it. My middle son’s teacher had the smart idea of putting their best work in a binder so that made it easy. My daughter had a portfolio that showed her best work, plus I kept her drawing book. My son, who finished grade 8, didn’t do any drawings or write any great stories but he did make an Aztec Temple out of cardboard, which was pretty good. He got 100% on it.

I still haven’t gone through all of the binders but I think at least my kitchen table is cleared although there’s still a pile of papers on the floor.

After going through my second son’s stuff I realized I might have some competition on the writing front.

Here is an excerpt from his take on Snow White and the Seven Dwarves.

She saw a big colorful house with a hippie Volkswagon in front. She saw that the colors were peace colors. She knocked on the door but there was no one home, so she stepped inside and saw seven peace sign beds, and seven posters above the beds saying; “May the peace be with you.” Around the table were seven peace sign plates and cups.

Maggie was so exhausted that she collapsed and was sound asleep on the floor.

The peace sign house belonged to seven hippies. They all worked at the park creating world peace all day. When they got home they turned on seven lava lamps and found Maggie lying on the floor.

Finally the oldest hippie asked Maggie, “Why are you like here, my dear.”

Maggie told them about the evil camp counselor and how she tried to kill her.

After the camp counselor tried to kill Maggie with pizza, stabbing her with a knife to the leg, she finally succeeded in killing her by knocking her unconscious then lighting the house on fire. (Not exactly the Disney version)

The hippies put Maggie on a mountain so everyone could see her beauty.

Back to the story…

Then Orlando bloom came by and was so astonished by Maggie that he took her with him. Orlando kissed her and she started to breath. Orlando took her out of the glass coffin and took her to Disney studios. When they got there Orlando asked Maggie to marry him. Maggie answered, “Duh, Of course I’ll marry you. You’re Orlando Bloom.” 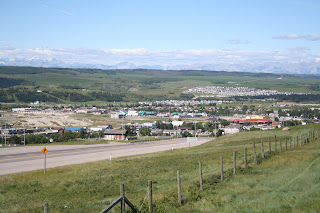 In the town I live in there is a hill that is about a mile long and is at an 8% grade. You can see the bottom bit in the photo. A few years ago when I finally got serious about losing the baby weight, I used to bike up it. I’d do it two or three times a week. At the beginning of the summer it took me 24 minutes to go up. By the end I was doing it in 18 or 19 minutes.
My husband could do it in 11 minutes and he often went up twice in a row.
With the broken wrist I haven’t been able to try this summer. My husband, who I’ll remind you had ankle surgery in April and hasn’t been able to do anything in 2 ½ months, decided to try and bike up it on Saturday.
While he was gone I thought alright finally I’ll be able to beat him. Surely he wouldn’t be able to do it faster than 18 minutes, he hasn’t been doing anything for 2 months. I was wrong. He did in it 16:50. Even injured he’s faster than me.
Comparing myself to others is a bad habit I’m really trying to stop. I am bad for comparing myself to others on all levels. Hair, weight, height, clothes, how they kick a soccer ball. It’s bad.
On Sunday we were in Sunday school and someone made the comment that Comparing yourself to others either makes you feel inferior or superior and both are bad.
I have to keep remembering that everyone writes differently and we all have strengths and weaknesses. My weaknesses may be others strengths and vice versa. All I can do is focus on the things I need to do better and not compare my book to one that’s already been published.
So this is my resolution for this week. No comparisons.
I won’t compare how I write to others. I won’t compare their story to mine. I will read a book just for fun and not over analyze it. I will focus on me being who I am and not trying to be someone else.
Wish me luck.
Posted by Patti at 10:16 AM 14 comments:

And now for something completely different...

After all of the doom and gloom around my home with injuries I thought a list of things that have made me laugh lately was in order.

Some of my daughter’s sayings, (she’s seven):

After a particularly bad refereed basketball game:
"That ref made me angry and I’m not very pretty when I’m angry."

After her older brother was teasing her:
"Being mean is one of your many qualities."

During wrestling match with second brother:
"Come and face it like a man."

After older brother asked why dad had chosen me as a wife (he thought it was because I was tall)
"Because she’s pretty."
Okay that one wasn’t funny but still adorable.

After making a joke in the car:
"I can’t help it if I’m funny today."

I usually don't put up a post 2x in one day but I went to the doctor and I get my cast off on Wednesday. I know that's early but my arm has been going numb inside the cast for about a week so she thought I could get it off and just wear a splint.

I still can't play soccer but I'm hoping, (keep your fingers crossed) that I'll be able to type without my arm going to sleep.

If you read my post before this one. I talked about settling for a mediocre sentence and I think that's stemming from the fact that typing is difficult right now. Hopefully all goes well and I'll be a typing machine again and I'll be back to editing with renewed vigor to make it the best I can make it.
Posted by Patti at 3:38 PM 3 comments:

Is it "Good Enough"

I was reading through a few chapters this weekend and I have to say that I am brilliant. I know it’s a bold statement and a little self-centered but truly there are moments in my book where I astonish myself with my amazing writing ability.

Okay so now let me qualify that statement before you all shake your heads in disgust and click the back button. I reiterate I had moments of brilliance. There were some sentences that I just thought, man that’s perfect. I captured the scene, the mood and the character all at once but then I read further. The next few sentences are just okay. They’re not bad but they’re certainly not brilliant. Then there are the sentences that I shake my head and scrunch up my face a little bit. I try to think of a different way to write it but nothing comes so I leave it, thinking to myself “good enough”.

At the end of the chapter I thought to myself how many “good enough” sentences did I have? So I have decided to re-read all chapters with renewed determination to have more brilliant moments than “good enough” moments.

What do you think? Is it okay to have a few moments of "good enough" or does it all need to be brilliant?
Posted by Patti at 8:54 AM 6 comments:

Do you connect to your characters?

A few years ago I worked with a lady who wrote Harlequin Romances. When I told her that I was interested in writing a book she gave me what she used to develop her characters. It was about three sheets full of questions like:

I tried using it before I started writing my book. I filled out every question, putting down what I thought my character would like. What her strengths and weaknesses were? But when it came to write her I became frustrated because I really didn’t know my character until I began to put her in situations. The connection didn’t come until after I’d been with her for a while. Now I love her and all of the other characters in the book even the bad ones. But it took a while.

What about you do you write a character sketch or do you just have a general idea before writing?
Posted by Patti at 10:26 AM 10 comments:

I have come to the horrible conclusion that the dryer is not shrinking all of my clothes.

I’ve been living in denial for a while but I can deny it no longer. I have gained weight.
Having a broken wrist has put a serious damper on my exercise regiment but unfortunately it hasn’t diminished my appetite so I’ve put on a few pounds in the last two weeks.

So starting today I have renewed my effort to keep myself in shape. Here’s my plan, every time I think about eating more than I should, I’ll go to my computer or notebook and write until that feeling goes away. This way I’ll slim down and get some writing done.

I’ll also try to you know...exercise. Since I can’t run (yet) I’ll walk and ride the stationary bike. I know that sounds really exciting.

So my hope is to be five pounds down and four chapters written by the end of June.

If this works I may have to write a diet book next.
Posted by Patti at 10:12 AM 3 comments:

What's in a name?

One of the funniest parts of starting a new project is picking names – I know I should have had more children. There’s just something about searching for names that I just love.

With my first book I picked a lot of names based on what they mean and then wrote the character to match.

Anyway I started planning for a project I’ve been thinking about for a year. In the book there’s a family of boys and I was looking at Old English names and came up with an idea. All of the names will focus on nature, more specifically trees. This family started out being very secondary characters but I can see them so clearly that I want to write more for them. Funny how that works.

Now for the father I have three names:
Garrick – governs with a spear
Waverly – tree-lined meadow
Stokley – tree stump meadow

The bottom two are tree related but I see his character as ruling with a spear. What do you think?
Posted by Patti at 8:42 AM 10 comments: