A Very Merry Christmas to all

Update: I got my shopping done and visited a few blogs. No cleaning, no wrapping, and no chapter 7.

But I still have tomorrow.

I hope everyone has a very Merry Christmas and a Happy New Year.

I will be enjoying family, food, going to a water park, an anniversary, a birthday (big 4-0), two weddings, and a reception, all of which will require driving 18 hours.

I'm pretty sure no writing will occur.

See you all in January and you can help me celebrate my birthday. Well, technically I won't see you in person, but I will see your profile pictures, so yeah, see you in January.
Posted by Patti at 9:55 PM 16 comments:

It's time to catch up

Tis the season for being busy.

So this week I've decided to catch up.

I'm going to clean my house - most of it anyway.

I'm going to finish my Christmas shopping - this is a must.

I'm going to wrap my presents - hopefully not all on Friday night.

I'm going to catch up on everyone's blogs this week - probably not all 199 blogs, but I'll try. Do you see how close I am to 200. It would nice if I could reach that before the end of the year. That would be nice Christmas present.

I'll be back to wish everyone a Merry Christmas at the end of the week.

Sometimes when I play soccer, I don't like to start, especially if we're playing a new team. I usually like to watch the game for a little bit so I can determine who to look out for, who has a strong kick, or who might take you out.

Likewise when I read blogs. Once in a while, when I read a blog I don't necessarily like to be the first person who comments, especially if its my first time to someone's blog. I like to see what others have to say. Maybe a couple of posts to get to know the person. Although lots of times that's backfired and they've said the exact same thing I would have said.

What about you? Are always excited to be the first one commenting or do you hang back and wait for a while?

PS: Please don't let this post deter anyone from commenting first and have a great weekend full of Christmas cheer.
Posted by Patti at 8:41 PM 14 comments:

Playing mid in soccer is hard. You have to defend and attack. For most of the indoor season I've been playing this position and last night I wimped out. During the second half, I psyched myself into thinking I could no longer play that position because I was so tired. So I asked someone to switch. After the game, I regretted making that decision and wished I would have made a better effort.

Last January I made two resolutions, to write a second book and to get an agent. I accomplished the first one, but like last night, I've kind of psyched myself out of trying for the second.

I sent out a handful of queries at the beginning of the year and didn't get any responses: no fulls, no partials - nothing. So I re-evaluated my book and decided to rewrite the beginning and end, but that's been done for a while. Then I decided to redo my query and write a synopsis. Both of those have been ready to go for a few months, but still I'm reluctant to press send.

So instead of making the goal for 2011 to get an agent, my goal is just to send out as many queries as I can (I'm thinking 100). I need to get over my fear of failure. I might become the queen of rejections, but I need to be okay with that, because the last thing I want is to look back at 2011 and wish that I would have made a better effort.
Posted by Patti at 5:02 AM 25 comments:

Why am I such a misfit?

Rudolph the Red-Nosed Reindeer is my favorite Christmas show. I watch it every year and last night I guilted my kids into watching it with me. We sang along to the songs and laughed at the lines, "And we won't let Rudolph join in any reindeer games" and "This is man's work."

What's your favorite Christmas show? I have to say I'm also partial to The Year without a Santa Claus, but that's mostly for the snow and heat miser scenes.
Posted by Patti at 9:11 PM 20 comments: 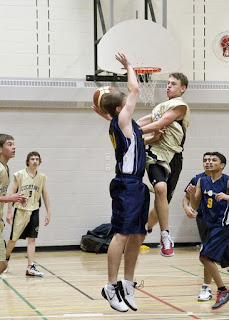 Last weekend my son played in his first basketball tournament of the season.

We're not a tall team and to make matters worse, our tallest and one of our best players got the flu and couldn't play the first game. Some of the kids thought for sure they would lose and I would have thought so to when we saw their competition. They were big and strong, some even had facial hair (a lot of it). Also just to help set the scene, our team is made up of grade 9 & 10 boys, while their team was grade 10 & 11 kids.
But you know what happened. The boys worked hard. They played tough defence and didn't let the ball get to the big guys. And in the end they shocked this big team from the city and won the game.
Bragging moment: It was one of my son's best games. He had 28 points, 15 rebounds, 9 assists, 7 steals, and 3 blocks.
I know there have been times when I look at other writers and thought, wow, I'll never be able to write like they do. Sometimes I accept defeat before I've even played the game. But what I need to keep in mind is that even though I might not have as much natural talent (height) that others have, if I work hard, I can eventually reach my goals. Sure it might take longer, but I'm a firm believer that hard work can trump height anyday.
Please note the photo is not of that game, the kids he played against were much taller and yes my son is the one with the ball and the boy with the moustache, well that was fake (it was Movember).
Posted by Patti at 8:10 AM 20 comments:

First of all I want to apologizing to everyone who commented on Monday's post. I usually email a response to your comment, but procrastination got in the way and then Christmas shopping took over, which is what I want to talk about today.

Back in September I made a goal not to buy anything for myself for four months. Anyone who knows me, knows that was huge, because I kind of love shopping. So although I didn't go total cold turkey, I did pretty good. One pair of soccer shorts $26 and one coat $35. Not bad - right?

Well today I went to the mall to do some shopping and it was so much fun. I got presents for my family and a dress for me since I do have a Christmas party and two weddings to go to this month. But the best part was shopping with my sisters and mom, who I haven't really done anything with since I made my goal. So even though I did really well on my goal - I've missed time with my family.

How does this relate to writing?

It's good to make goals, but don't let it get in the way of other things that are maybe more important.
Posted by Patti at 9:50 PM 18 comments:

How many writers does it take?

A while ago Michelle made a comment that kind of popped back into my head tonight.

She mentioned that she had too many people read her first book, Monarch, which is about to be published. She didn't explain why. I can only guess that too many people, means too many opinions. But this had me wondering - what is the magic number. Should you have less than five, more than five, but less than ten.

So far I've had five, but the first two don't really count anymore, because it's a completely different book since then, so really I've had three.

Takes a licking but keeps on.... 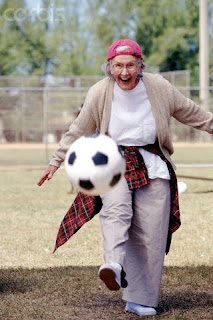 Thanks for the well wishes on my last post. Apparently, I suffered a minor concussion and have either bruised or broken ribs. I'll be getting an x-ray tomorrow and will find out on Monday how long my soccer break will be.
My doctor said to me as he shook his head, "This soccer thing has been hard on you."
But when I'm playing soccer, I don't look at all of the injuries I've had (broken wrist, achilles problems, sprained knee). I only see all the fun I've had. I'm doing something I love with people I love. So even though I might regret it when I'm 60 and can hardly walk, I'll keep playing until I can't run anymore.
Same with writing. Yes there's hardship. Sometimes rejection can get you down. Sometimes the lack of words has you questioning what the hell you're doing, but I know this for sure. I will keep writing for as long as I can.
Posted by Patti at 7:28 AM 23 comments: